Betsafe is one of the reputable casinos around the world. It has been in existence since 2006 and is known for its outstanding service, a huge collection of games and a great mobile casino. When it started, mobile casino gaming was not so pronounced. However, today most of its players use the mobile casino. The mobile casino provides a great opportunity for players to enjoy gaming in their devices.

The casino is licensed by various jurisdictions that include the UK Gambling Commission, Swedish Gambling Authority, Alderney Gambling Control Commission, and Malta Gambling Authority. The site has a neat structure and is easy to navigate. It has a dark theme, which looks great especially with the introduction of dark themes for various apps. In this article, we are going to look at the Betsafe Casino mobile platform in detail to explore its customer experience and available games.

A Quick Review and Rating of Betsafe Casino App

A good number of players would like to play on the go. Many of them opened the casino account on their PCs. The Betsafe app gives them a chance to play on either the Android or the iOS platform. If your device is not any of these two platforms or you do not want to install an app, you can use the HTML-based mobile casino. The browser-based casino also offers quality gaming like the app. Using the app gives you a personalised touch as you can tweak the casino settings as per your preferences. This is not available in the web-based casino. 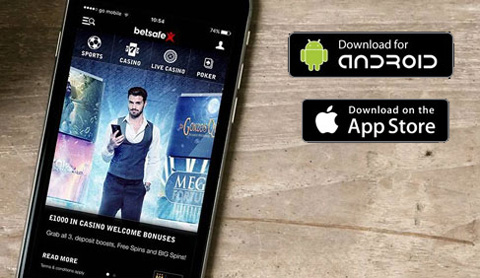 A few games and pages have been tweaked and have a different layout. The casino does this to create a better gaming experience for users with small screens. Its layout is optimised such that it is easy to click on buttons and read content without having to zoom in. However, everything else looks like the main website.

The mobile casino is connected to your main casino. Therefore, if you are installing an app and had an account with the casino, you just need to log into the app, and all your balances and settings will be reflected on the app. All promotions you enjoyed on the desktop will also be available on the app.

It is easy to install the app. Just head to the respective mobile platform app stores and download your app. It is less than 20 MB and does not take lots of memory when in operation. We have considered the gaming experience, availability of the app on different platforms, ease of use and available feature when rating the app. It gets a rating of 8.6 out of 10.

What Devices are Compatible with Betsafe Casino App?

You will get the best Betsafe apps on Google Playstore and App. Just get into the app store of your platform and download the app. However, before downloading, check if the device meets the minimum software requirements for the app. Devices that run Android 4.0 and above and iOS devices running iOS 8.0 and above should run the software without any glitches. You will also be notified from the respective stores if the app is compatible with your device. Avoid installing the app from third-party sites as the app may come with malicious software.

If your device accepts many of the other popular apps, you should not have any problem installing the Betsafe app. All popular Android devices that include Samsung Galaxy devices, HTC, Huawei, Xiaomi, Oppo, Google Nexus and Pixel, Sony Experia, Techno, ZTE and Nokia Android accept the software. On the other hand, iPhones 5s, 6s, 7s and X series accept the app. You can also run the app on iPad Air and iPad.

In the normal operation, the app should not take much of the memory at the expense of the others unless you are running low on RAM and storage space. As long as you have a RAM of 1GB or more and 200 MB of storage space, you are good to go. Software downloaded from the official sites is safe; it does not collect any information. We recommend the app for all Betsafe regular players as opposed to playing on the web-based casino.

There are hundreds of games available at the mobile casino. Therefore, you are in for a good casino experience with the mobile. The titles found on the app include popular games and new titles added from time to time. These games are provided by over twenty software providers that include large gaming software providers and upcoming ones. Just scroll the titles to see what is in offer. Here are the main categories where you find the most popular Betsafe mobile games.

Slots take up the largest portion of games at the mobile casino. You will find hundreds of slots that range from classic titles to modern, jackpot, movie-themed and progressive jackpots. The app gives you quality graphics to enable you to play video slots with quality pictures. You can also use the search feature to locate your favourite slot with ease.

If you love the classics, Betsafe has the best classic games such as blackjack and roulette. They come in various variants that you can play for free or real money. There are also scratch cards and video pokers that you can explore.

The live casino offers a realistic casino experience, just like playing in a land casino. The Betsafe live casino section provides tens of popular roulette, baccarat and blackjack tables with limits ranging from as low as $0.5 to as a high as $10,000 on different tables. Besides, you can play Caribbean Stud poker and Casino Hold ‘em.

Our Conclusion with Betsafe App

We are glad that the Betsafe mobile casino provides all the popular casino games titles. It has also tried to offer variety to its players by offering titles from various providers, both upcoming and large ones.

The app is easy to install on both Android iOS platforms. There is also a browser-based mobile casino. In addition, it has a nice layout, which makes it easy to get your preferred games with ease. It is also easy to play games on a small screen. You will find nearly all the games found on the desktop site along with promotions and payment methods. We recommend the app for all players at the casino.